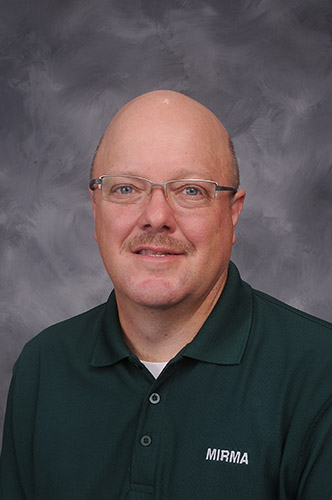 Jeff was raised in Keytesville, Missouri, is a graduate from Moberly Junior College and Central Missouri State University in Warrensburg with a Bachelor of Science in Business Administration. Jeff’s first job following college was as an Assistant Manager at Kay Bee Toys in Independence, Missouri, where he was promoted to store manager, and later was hired by Toys “R” Us as a store director. Jeff returned to Central Missouri State University to continue his education and earned a Master of Science in Industrial Safety Management. After receiving his master’s degree, Jeff was hired by AON as a loss control consultant for the Missouri Workers’ Compensation Plan or the assigned risk market. While employed at AON, Jeff was able to conduct hazard surveys of various industries doing business within the state as well as perform audits of AON’s national accounts.
Jeff moved to Columbia in 1996 and he continued to work for Aon from his home. In June, 1999, he accepted a position at MIRMA as a Loss Control Consultant and has been employed by MIRMA since.
As Loss Control Specialist, Jeff’s job responsibilities include conducting on site audits, loss control evaluations and safety training, among other duties. Jeff currently holds the following designations: CPCU, ARM-P, CPSI, is a Certified Missouri Safety Consultant, Certified Municipal Official, and completed levels 1 and 2 of the Missouri L-Tap Road Scholar Program.